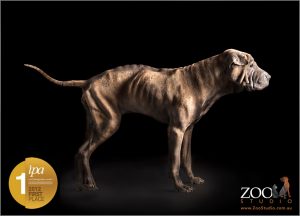 Ken Drake our photographer at Zoo Studio and has been working exclusively with animals for 6 years. He photographs over 1200 dogs each year, plus multiple cats, birds, snakes, lizards, rats, kangaroos, and many others. Ken has recently received much international acclaim for his animal photos, winning the PDN Faces competition, being a finalist in the International Aperture Awards and Canon Creative Asia competition, and being made an Associate of the Australian Institute of Professional Photography.  Well done Ken we are so so proud of your photography acheivements and for highlighting the reality that some dogs face EVERY DAY!

The day before coming to the studio Dale had been found abandoned on the streets, we were asked by Peiradise Shar Pei rescue to capture his photo and tell his story because – he could not do it himself!  He was blind, in incredible pain from a ripped cruciate ligament in his right rear leg, and was severely malnourished. Ken posed him in a typical ‘stack shot’ pose (because he was most comfortable this way) but a “stack shot” is also that pedigree show dog people use – we wanted to highlight the difference between a well cared for dog and an abused dog. He is well on the way to a full recovery thanks to Peiradise Shar Pei Rescue in Brisbane, Australia for the amazing work they do.

About IPA AWARDS:
The 2012 International Photography Awards received nearly 15,000 submissions from 103 countries across the globe. IPA is a sister-effort of the Lucie Foundation, where the top three winners are announced at the annual Lucie Awards gala ceremony. The Foundation’s mission is to honor master photographers, to discover new and emerging talent and to promote the appreciation of photography. Since 2003, IPA has had the privilege and opportunity to acknowledge and recognize contemporary photographers’ accomplishments in this specialized and highly visible competition. Visit www.photoawards.com for more details.